The nineteenth annual election for the English Wikipedia's Arbitration Committee took place in November and December 2021.

These processes must be initiated and evaluated by volunteer coordinators, as there is no Electoral Commission at this stage.

Following the voting period, the scrutineers examined the votes and released a tally of the results. The tally ranked candidates by their performance according to the criteria for success in this election, defined as the number of votes cast in support of the candidate divided by the total number of votes cast both for and against (commonly described as "support over support plus oppose" or "S/(S+O)"). "Neutral" preferences were not counted in this metric. A total of 1633 ballots were cast including 63 duplicates, leaving 1572 votes. 2 votes were further invalidated, thereby resulting in 1570 votes which are tallied below.

The rules for the election were determined by successive community Requests for Comment. Prior rules continued to be in force unless they had specific expiration dates or had been subsequently repealed or amended. A referenced summary of the election rules is available at ACERFC decisions to date.

For the 2021 election, seven current arbitrators were to remain on the committee. This left eight (8) vacant seats to be filled in this election for either a two-year term (January 1, 2022 – December 31, 2023) or a one-year term (January 1, 2022 – December 31, 2022), depending on the candidate's level of support. Candidates were appointed in decreasing order of their percentage of support, as calculated by support/(support + oppose), until all seats were filled or no more candidates met the required support percentage. There was a neutral option; choosing this option would not affect the support percentage for the candidate, and was treated as though you did not vote with respect to that candidate.

The minimum percentage of support that is required is 60% for a two-year term, and 50% for a one-year term. If any of the seven current arbitrators in midterm resigned or otherwise left the committee before the start of voting, the additional vacated seat would be filled for a one-year term in this election, after the original eight vacant seats are filled. If there were more vacant seats than candidates with the required minimum support, those seats would have remained vacant until the next election. 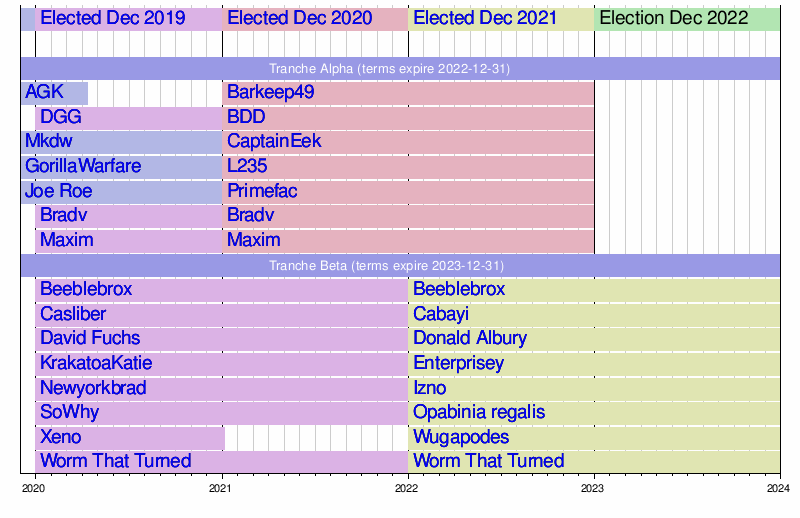 The Arbitration Committee elections are organized entirely by community volunteers, independent of the Arbitration Committee itself. Before every election, an RfC is held so that the community may propose and implement any changes to the format of the election. Any rules or practices that were not specifically changed by the RfC are carried over from the previous election.

The last group of volunteers are the scrutineers. Three scrutineers are drawn from stewards who primarily work at other projects. Scrutineers are responsible for providing oversight for the voting process itself. Scrutineers' responsibilities include guarding against abuse and technical errors, ensuring that valid votes are counted while invalid ones are discarded, and confirming that the final tally of votes is correct and certifying the official results. Scrutineers work behind the scenes and are not otherwise involved in coordinating the more minor areas of the election. The Electoral Commission is the liaison between the scrutineers and the rest of the community.

Nominations for candidates opened at 00:00 UTC, 07 November 2021 and closed at 23:59 UTC, 16 November 2021. During this time, any editor in good standing who met the criteria stated in the "Election timeline" section above could nominate themselves by following the instructions to create a candidate statement on the candidates page. Once a candidate made their statement, they could proceed to answer individual questions as they wished (see the questions page for details and instructions). Candidates could continue to answer questions until the end of the voting period (23:59 UTC, 06 December 2021).

Once candidates nominated themselves, voters were invited to review and discuss them. Voters could ask questions throughout the election.

To facilitate their discussions and judgements, voters were encouraged to familiarize themselves with the candidates. This could be done through reading the candidate statements, the answers to the questions put to each candidate (linked from their candidate statements), and the discussion of each candidate (a centralized collection of which was made available at the discussion page). In addition, a summary guide to candidates was made available, and augmented by a set of personal guides by individual voters.

Voting ran for 14 days, from 00:00 UTC, 23 November 2021 to 23:59 UTC, 06 December 2021. The process was conducted using the SecurePoll extension which ensured that individual voters' decisions were not publicly viewable (although technical information about voters, such as their IP address and user-agents, were visible to the WMF-identified election administrators and scrutineers).

Voters were invited to choose one of three options for each candidate: "Support", "Oppose" or "Neutral"; and the number of "Support", "Oppose" or "Neutral" preferences a voter could express was otherwise limited only by the number of candidates. After voters entered their choices for all of the candidates and submitted their votes, they could revisit and change their decisions, but attempting to do so would require expressing preferences for all candidates from scratch. Because of the risk of server lag, voters were advised to cast their vote at the latest an hour before the close of voting to ensure their vote would be counted.