The Great Journeys of New Zealand

The Great Journeys of New Zealand is the tourism division of KiwiRail that brings together its three Scenic train services (TranzAlpine, Northern Explorer and Coastal Pacific) with its passenger ferry business, Interislander. The new division was launched in May 2017 and replaced the former tourism brand KiwiRail Scenic Journeys.[1] It has continuity with the earlier InterCity Rail (1987–1995) and Tranz Scenic (1995–2011). 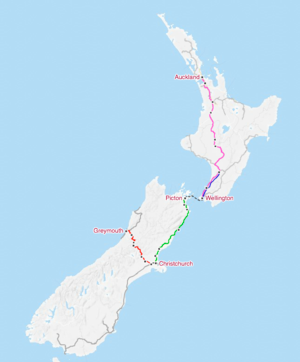 Passenger trains in New Zealand were operated by the New Zealand Railways Department from 1880 to 1981, alongside private rail operators such as the Wellington and Manawatu Railway Company. The Department was corporatised as the New Zealand Railways Corporation (NZRC) in 1982, and later reorganised as a state-owned enterprise in 1986. A consulting study commissioned by the NZRC and carried out by Booz Allen Hamilton recommended re-orientation of long-distance passenger services toward tourist operations.[2]

Tranz Rail was taken over by Australian transport firm Toll Holdings in 2003. The company was renamed Toll NZ and did not retain any of the Tranz Rail directors. In July 2004 the 50% share of Tranz Scenic was purchased by Toll, as one of the West Coast Railway directors had died and the business was not performing adequately.[7] In May 2008 the New Zealand Government agreed to buy the rail and sea transport assets of Toll NZ Limited for $665 million.[8] The government branded the new company KiwiRail.

In 2011, KiwiRail developed a new brand of passenger trains geared toward the increasing tourism industry in New Zealand. The new brand, named KiwiRail Scenic Journeys, was launched with new AK-class carriages designed to showcase New Zealand's scenery,[9] as well as providing long-distance passenger train services. During the transformation, the TranzCoastal train was rebranded as the Coastal Pacific and the Overlander became the Northern Explorer; whereas the TranzAlpine's name was retained.

In July 2012, it was revealed that KiwiRail was considering selling the remaining services.[10] No buyers were found and the long-distance passenger services remain operated by KiwiRail Scenic Journeys.

Meanwhile, KiwiRail's ferry brand, Interislander, was building on its core business taking vehicles and freight across Cook Strait and looking to promote the trip as an iconic tourism experience and a scenic alternative to flying.

In 2017, KiwiRail decided to bring its rail and ferry operations together under one brand, The Great Journeys of New Zealand, which offers a connected passenger service throughout New Zealand, from Auckland to Greymouth, via train and ferry. The division is now experiencing rapid double-digit annual growth, due to the growth of Chinese tourism to New Zealand, leading KiwiRail to announce that it may purchase eight AK-class carriages to add to the seventeen purchased in 2010.[11]

In 2021, KiwiRail announced the suspension two of its three services, the Northern Explorer and the Coastal Pacific. KiwiRail will restart the services from September 2022.[12]

The Northern Explorer about to depart from Wellington railway station with new AK class carriages.
DCP 4761 in Tranz Scenic livery hauling the TranzAlpine.

KiwiRail trialled excursions with its refurbished Silver Fern railcar to destinations including Napier and on the now mothballed Gisborne line as part of its Explore By Rail trips. Other Silver Fern tours included a Queen's Birthday day tour to Napier, tours to the Tui brewery via the Manawatu Gorge, an Easter Weekend trip to Gisborne, Valentine's Weekend and ANZAC Weekend tours to the central North Island. These excursions have been discontinued as of 2017.

KiwiRail Scenic Journeys's former Capital Connection train is not included in the Great Journeys of New Zealand brand. It is, however, operated by KiwiRail and subsidised by the Greater Wellington Regional Council as a long-distance commuter train.[16]

New AK class carriages on the Coastal Pacific at Picton.

In March 2009, the New Zealand Government confirmed funding of NZ$39.9 million for 17 AK Class carriages for the TranzAlpine and Coastal Pacific. The class are the first passenger carriages to be designed and built in New Zealand for many years and were built at KiwiRail's Hillside Workshops in Dunedin, with three cars entering service on the Coastal Pacific on 2 November 2011.[17]

The Overlander hauled by an EF class electric locomotive near Waiouru on the North Island Main Trunk.

The Tranz Scenic brand and blue livery has been replaced by white KiwiRail livery with the introduction of AK carriages on the Coastal Pacific, TranzAlpine and Northern Explorer.[18]

In April 2006, Toll NZ announced that it was proposing to sell its two South Island trains,[19] the TranzAlpine and the TranzCoastal. In July the end of The Overlander service was announced, but after significant protest and an increase in patronage (due to the publicity) the service continued, operating on Fridays, Saturdays and Sundays during winter and daily in high summer. In 2009 a resumption of seven-day-a-week operation was announced, a result of increasing passenger numbers.

However, the Overlander ceased operations in 2012, being superseded by the Northern Explorer service, again on limited days of the week.