Étienne-Joseph-Théophile Thoré (better known as Théophile Thoré-Bürger) (23 June 1807 – 30 April 1869) was a French journalist and art critic. He is best known today for rediscovering the work of painter Johannes Vermeer and several other prominent Dutch artists. 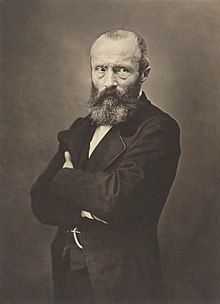 Thoré-Bürger was born in La Flèche, Sarthe. His career as art critic started in the 1830s, but he was also active as a political journalist. In March 1848 he founded La Vraie République, which Louis-Eugène Cavaignac soon banned. A year later, in March 1849, he founded another newspaper, Le Journal de la vraie République, which Cavaignac also banned. Consequently, Thoré-Bürger went into exile to Brussels and continued publishing articles as Willem Bürger. He returned to France after the amnesty of 1859, dying in Paris ten years later.

Today, Thoré-Bürger is best known for rediscovering the work of Johannes Vermeer and several other prominent Dutch artists, such as Frans Hals (he was the first to describe the portrait of Malle Babbe), Carel Fabritius, and others. Thoré-Bürger's interest in Vermeer began in 1842 when he saw the View of Delft in the Mauritshuis of The Hague. Vermeer's name was wholly forgotten at the time; Thoré-Bürger was so impressed with the View of Delft that he spent the years before his exile searching for other works by the painter. He would eventually publish descriptions and a catalogue of Vermeer's work, although many of the paintings he attributed to the master were later proven to have been executed by others.

He lived for more than a decade with Apolline Lacroix, the wife of his collaborator Paul Lacroix, the curator of the Bibliothèque de l'Arsenal.[1] On Thoré-Bürger's death, she inherited his valuable art collection, much of which was eventually sold.[1][2][3]