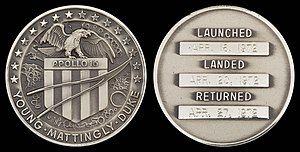 NASA space-flown Apollo medallions were mission-specific commemorative medallions which were approved by NASA and carried aboard the mission spacecraft into orbit. Apollo 16 (April 16 – 27, 1972) was the tenth crewed mission in the United States Apollo space program, and the fifth and next-to-last to land on the Moon. It featured an extended stay on the lunar surface, a focus on science, and the use of the Lunar Roving Vehicle. The mission was crewed by Commander John Young, Lunar Module Pilot Charles Duke and Command Module Pilot Ken Mattingly.

The medallions were struck by the Robbins Company in sterling silver and ordered by the mission crew as a personal memento of their flight; they were often taken to the lunar surface in the landing module. A total of over 3,000 Robbins medallions were flown into space across the 12 crewed flights of the Apollo program.Photograph credit: Heritage Auctions; commissioned by the NASA astronaut office

This image was chosen at random from a selection of eleven. (View another image)