Steer wrestling, also known as bulldogging, is a rodeo event in which a horse-mounted rider chases a steer, drops from the horse to the steer, then wrestles the steer to the ground by grabbing its horns and pulling it off-balance so that it falls to the ground. The event carries a high risk of injury to the cowboy. There are some concerns from the animal rights community that the competition may include practices that constitute cruelty to animals, but the injury rate to animals is less than five-hundredths of one percent.[1] A later PRCA survey of 60,971 animal performances at 198 rodeo performances and 73 sections of "slack" indicated 27 animals were injured, again approximately five-hundredths of 1 percent – 0.0004.[2] 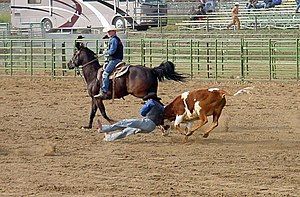 Steer wrestling at the CalPoly rodeo

Historically, steer wrestling was not a part of ranch life. The event originated in the 1890s, and is claimed to have been started by an individual named Bill Pickett, a Wild West Show performer said to have caught a runaway steer by wrestling it to the ground.[3] There are several versions of the story, some claiming that he developed the idea after he observed how cattle dogs worked with unruly animals.[4]

The event features a steer and two mounted cowboys,[5] along with a number of supporting characters. The steers are moved through narrow pathways leading to a chute with spring-loaded doors. A barrier rope is fastened around the steer's neck which is used to ensure that the steer gets a head start. The rope length is determined by arena length. On one side of the chute is the "hazer", whose job is to ride parallel with the steer once it begins running and ensure it runs in a straight line, on the other side of the chute the "steer wrestler" or "bulldogger" waits behind a taut rope fastened with an easily broken string which is fastened to the rope on the steer.

When the steer wrestler is ready he "calls" for the steer by nodding his head and the chute man trips a lever opening the doors. The suddenly freed steer breaks out running, shadowed by the hazer. When the steer reaches the end of his rope, it pops off and simultaneously releases the barrier for the steer wrestler. The steer wrestler attempts to catch up to the running steer, lean over the side of the horse which is running flat out and grab the horns of the running steer. The steer wrestler then is pulled off his horse by the slowing steer and plants his heels into the dirt further slowing the steer and himself. He then takes one hand off the horns, reaches down and grabs the nose of the steer pulling the steer off balance and ultimately "throwing" the steer to the ground. Once all four legs are off the ground, an official waves a flag marking the official end and a time is taken. The steer is released and trots off.

Bringing the steer to the ground

The original method of wrestling the steer to the ground is to lean from the galloping horse which is running beside the steer, giveing the weight of the upper body to the neck to the steer with one hand on the near horn of the steer and the far horn grasped in the crook of the other elbow. One then lets the horse carry his feet by the steer until his feet naturally fall out of the stirrups. The steer wrestler then slides with his feet turned slightly to the left, twisting the head of the steer toward one by pushing down with the near hand and pulling up and in with the far elbow. Finally the steer wrestler lets go of the near horn, and puts the steer's nose in the crook of his left elbow, and throws his weight backwards causing the steer to become unbalanced and fall to the ground.

Typical professional times will be in the range of 3.0 to 10 seconds from the gates opening to the waving of the flag. The steers used today are generally Corriente cattle or longhorns, which weigh between 450–650 pounds, and the human steer wrestlers typically weigh 180–300 pounds. While steer wrestlers have a lower injury rate than bull riders or bronc riders,[6] their injury rate is higher than that of the speed events.[7]

Like all other rodeo events, steer wrestling is under fire by animal rights advocates. Modern rodeos in the United States are closely regulated and have responded to accusations of animal cruelty by instituting a number of rules to guide how rodeo animals are to be managed.[2] In 1994, a survey of 28 sanctioned rodeos was conducted by on-site independent veterinarians. Reviewing 33,991 animal runs, the injury rate was documented at 16 animals or 0.047 percent, less than five-hundredths of one percent or one in 2000 animals.[8] A study of rodeo animals in Australia found a similar injury rate. Basic injuries occurred at a rate of 0.072 percent, or one in 1405, with injuries requiring veterinary attention at 0.036 percent, or one injury in every 2810 times the animal was used, and transport, yarding and competition were all included in the study.[1] A later PRCA survey of 60,971 animal performances at 198 rodeo performances and 73 sections of "slack" indicated 27 animals were injured, again approximately five-hundredths of 1 percent – 0.0004.[2]

However, accusations of cruelty in the USA persist. The PRCA acknowledges that they only sanction about 30 percent of all rodeos, while another 50 percent are sanctioned by other organizations and 20 percent are completely unsanctioned.[2] Several animal rights organizations keep records of accidents and incidents of possible animal abuse.[9] They cite various specific incidents of injury to support their statements,[10] and also point to examples of long-term breakdown,[11] as well as reporting on injuries and deaths suffered by animals in non-rodeo events staged on the periphery of professional rodeo such as chuck wagon races and "Suicide Runs". In terms of actual statistics on animal injury rate, there appear to be no more recent independent studies on animal injury in rodeo than the 1994 study. However, groups such as People for the Ethical Treatment of Animals (PETA) periodically incidents of animal injury. [12] According to the ASPCA, practice sessions are often the scene of more severe abuses than competitions.[13]