The Royal Philharmonic Society (RPS) is a British music society, formed in 1813. Its original purpose was to promote performances of instrumental music in London. Many composers and performers have taken part in its concerts. It is now a membership society, and while it no longer has its own orchestra, it continues a wide-ranging programme of activities which focus on composers and young musicians and aim to engage audiences so that future generations will enjoy a rich and vibrant musical life. Since 1989, the RPS has promoted the annual Royal Philharmonic Society Music Awards for live music-making in the United Kingdom. 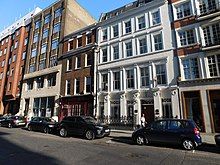 The RPS is a registered UK charity No. 213693, located at 48 Great Marlborough Street in London. The current chief executive of the RPS is James Murphy, and its current chairman is John Gilhooly.

In London, at a time when there were no permanent London orchestras, nor organised series of chamber music concerts, a group of thirty music professionals formed the Philharmonic Society of London on 6 February 1813. The idea was that by cooperating, they could build a stronger orchestra than by competing against one another.[1] However, given the organization's choice to hold its concerts at the Argyll Rooms, it is likely that the society was initiated because of John Nash's bold urban redesign of Regent Street. In this way, the society would gain an impressive performing space once the old Argyll Rooms had to be rebuilt due to the Regent Street plan, and Prince regent George IV could promote classical music as a British institution and thereby improve his reputation.[2] Concerts were held in the Argyll Rooms until it burned down in 1830.

The Society's aim was "to promote the performance, in the most perfect manner possible of the best and most approved instrumental music". The first concert, on 8 March 1813, was presided over by Johann Peter Salomon, with Muzio Clementi at the piano and the violin prodigy Nicolas Mori as lead violinist, performing symphonies by Joseph Haydn and Ludwig van Beethoven. Among the founders were the pianist and violinist William Dance (who became the society's first director and treasurer until his death in 1840), composer Henry Bishop, and Charles Neate, a pianist and friend of Beethoven, who publicised Beethoven's music at the Society.

The Society asked Beethoven to come to London, but the composer's health prevented his accepting the invitation. However the society's request for a new symphony from him resulted in the Choral Symphony. In 1827 Beethoven wrote to the society outlining his straitened circumstances; at a special general meeting the society resolved to send the composer £100 immediately (equivalent to £9,200 in 2021;[3] George Bernard Shaw once referred to this as "the only entirely creditable incident in English history"). Other works written for the Society include the Italian Symphony by Felix Mendelssohn. Distinguished conductors included Ludwig Spohr, one of the first conductors to use a baton, Hector Berlioz, who conducted a concert of his works in 1853, Richard Wagner, who conducted the whole 1855 season of orchestral concerts, William Sterndale Bennett for the following ten years, Arthur Sullivan, and Tchaikovsky, who conducted his own works in 1888 and 1893.

From 1830 to 1869, the Society gave its concerts in the concert-hall of Hanover Square Rooms, which had seating for only about 800. The Society decided to move permanently to St James's Hall, and a complimentary additional concert, held at the hall, was given to its subscribers at the end of the 1868–69 season. Charles Santley, Charles Hallé, Thérèse Tietjens and Christina Nilsson were the soloists.[4] When the move was made, the Society remodelled its charges to obtain a wider audience and compete with the Crystal Palace and other large venues, and introduced annotated programmes. The Society remained at the hall until 28 February 1894, when it moved to the Queen's Hall.[5]

The society became the Royal Philharmonic Society during its 100th concert season in 1912, and continued organising concerts through the two world wars. It is now a membership society which "seeks to create a future for music through the encouragement of creativity, the recognition of excellence and the promotion of understanding."[6]

The Gold Medal was first awarded in 1871. The medal depicts the profile of a bust of Beethoven by Johann Nepomuk Schaller (1777–1842) which was presented to the society in 1870, Beethoven's centenary. It is awarded for "outstanding musicianship", and is given rarely – in 2015 the medal was awarded for the hundredth time.[7]