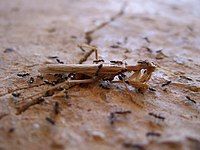 A society is a group of individuals involved in persistent social interaction, or a large social group sharing the same spatial or social territory, typically subject to the same political authority and dominant cultural expectations. Societies are characterized by patterns of relationships (social relations) between individuals who share a distinctive culture and institutions; a given society may be described as the sum total of such relationships among its constituent of members. In the social sciences, a larger society often exhibits stratification or dominance patterns in subgroups.

Insofar as it is collaborative, a society can enable its members to benefit in ways that would otherwise be difficult on an individual basis; both individual and social (common) benefits can thus be distinguished, or in many cases found to overlap. A society can also consist of like-minded people governed by their own norms and values within a dominant, larger society. This is sometimes referred to as a subculture, a term used extensively within criminology, and also applied to distinctive subsections of a larger society.

More broadly, and especially within structuralist thought, a society may be illustrated as an economic, social, industrial or cultural infrastructure, made up of, yet distinct from, a varied collection of individuals. In this regard society can mean the objective relationships people have with the material world and with other people, rather than "other people" beyond the individual and their familiar social environment. (Full article...)

Lesbian is a term most widely used in the English language to describe sexual and romantic desire between females. Lesbian, as a concept, is used to differentiate women with a shared sexual orientation, and the concept is a 20th-century construct. Throughout history, women have not had the freedom or independence to pursue homosexual relationships where men have. However, they also have not met the same harsh punishment in some societies as homosexual men. In the past, lesbian relationships were sometimes regarded as harmless unless the participants attempted to pursue privileges traditionally enjoyed by their peers. As a result, little in history has been documented to give an accurate description of how female homosexuality has been expressed. When early sexologists in the late 19th century began to categorize and describe homosexual behavior, hampered by a lack of knowledge about lesbianism or women's sexuality, they distinguished lesbians as women who did not adhere to female gender roles and designated them mentally ill. Women in homosexual relationships responded to this designation either by hiding their personal lives or accepting the label of outcast and creating a subculture and identity that developed in Europe and the United States. Women exhibit sexual fluidity; some women who engage in homosexual behavior may reject identifying as lesbian or as bisexual. Greater understanding of women's sexuality has led to three components to identifying lesbians: sexual behavior, sexual desire, or sexual identity.
edit 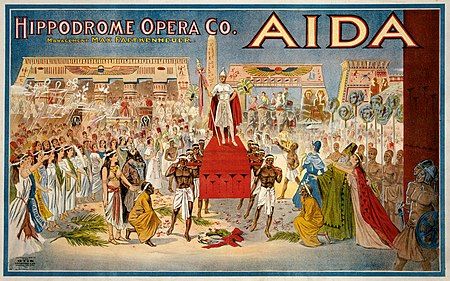 A poster for a 1908 American production of Aida, an opera by Giuseppe Verdi that premiered on December 24, 1871, to great acclaim at the Khedivial Opera House in Cairo, Egypt. However, Verdi was most dissatisfied that the audience consisted of invited dignitaries and critics, but no members of the general public. He therefore considered the European premiere, held at La Scala, Milan, to be its real premiere.

Larry Sanger
Lawrence Mark "Larry" Sanger (born July 16, 1968) is a former philosophy professor, co-founder of Wikipedia, and the founder of Citizendium. He grew up in Anchorage, Alaska. From an early age he has been interested in philosophy. Sanger received a Bachelor of Arts in philosophy from Reed College in 1991 and a Doctor of Philosophy in philosophy from Ohio State University in 2000. Most of his philosophical work has focused on epistemology, the theory of knowledge. He has been involved with various online encyclopedia projects. He is the former editor-in-chief of Nupedia, chief organizer (2001–2002) of its successor, Wikipedia, and founding editor-in-chief of Citizendium. From his position at Nupedia, he assembled the process for article development. Sanger proposed implementing a wiki, which led directly to the creation of Wikipedia. Initially Wikipedia was a complementary project for Nupedia. He was Wikipedia's early community leader and established many of its original policies. He spearheaded an alternative wiki-based project, Citizendium. Sanger had left Wikipedia in 2002, and has since been critical of the project. He articulated that despite its merits, Wikipedia lacks credibility due to, among other things, a lack of respect for expertise. After leaving the project, Sanger taught philosophy at Ohio State University and was an early strategist for the expert-authored Encyclopedia of Earth. On September 15, 2006 he publicly announced Citizendium, first envisioned as a fork of Wikipedia. It was launched on March 25, 2007. Citizendium represents an effort to create a credible and free-access encyclopedia. Sanger had aimed to bring more accountability to the Internet encyclopedia model. He is working on developing educational projects for individuals behind WatchKnowLearn and is designing a program to teach children how to read. He started blogging on various subjects, including baby reading. He also works part-time as a writer, speaker, and consultant on the topic of collaborative online communities. (Full article...)
More selected biographies
edit

Things you can do

What are WikiProjects?
edit