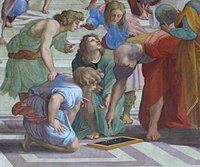 Quicksort
Credit: RolandH
Quicksort (also known as the partition-exchange sort) is an efficient sorting algorithm that works for items of any type for which a total order (i.e., "≤") relation is defined. This animation shows how the algorithm partitions the input array (here a random permutation of the numbers 1 through 33) into two smaller arrays based on a selected pivot element (bar marked in red, here always chosen to be the last element in the array under consideration), by swapping elements between the two sub-arrays so that those in the first (on the left) end up all smaller than the pivot element's value (horizontal blue line) and those in the second (on the right) all larger. The pivot element is then moved to a position between the two sub-arrays; at this point, the pivot element is in its final position and will never be moved again. The algorithm then proceeds to recursively apply the same procedure to each of the smaller arrays, partitioning and rearranging the elements until there are no sub-arrays longer than one element left to process. (As can be seen in the animation, the algorithm actually sorts all left-hand sub-arrays first, and then starts to process the right-hand sub-arrays.) First developed by Tony Hoare in 1959, quicksort is still a commonly used algorithm for sorting in computer applications. On the average, it requires O(n log n) comparisons to sort n items, which compares favorably to other popular sorting methods, including merge sort and heapsort. Unfortunately, on rare occasions (including cases where the input is already sorted or contains items that are all equal) quicksort requires a worst-case O(n2) comparisons, while the other two methods remain O(n log n) in their worst cases. Still, when implemented well, quicksort can be about two or three times faster than its main competitors. Unlike merge sort, the standard implementation of quicksort does not preserve the order of equal input items (it is not stable), although stable versions of the algorithm do exist at the expense of requiring O(n) additional storage space. Other variations are based on different ways of choosing the pivot element (for example, choosing a random element instead of always using the last one), using more than one pivot, switching to an insertion sort when the sub-arrays have shrunk to a sufficiently small length, and using a three-way partitioning scheme (grouping items into those smaller, larger, and equal to the pivot—a modification that can turn the worst-case scenario of all-equal input values into the best case). Because of the algorithm's "divide and conquer" approach, parts of it can be done in parallel (in particular, the processing of the left and right sub-arrays can be done simultaneously). However, other sorting algorithms (including merge sort) experience much greater speed increases when performed in parallel.

Did you know – view different entries

More did you know facts
Showing 7 items out of 75

More Did you know (auto generated)

A wallpaper group is a mathematical concept used to classify repetitive designs on two-dimensional surfaces, such as floors and walls, based on the symmetries in the pattern. Such patterns occur frequently in architecture and decorative art. The mathematical study of such patterns reveals that exactly 17 different types of pattern can occur.

Wallpaper groups are examples of an abstract algebraic structure known as a group. Groups are frequently used in mathematics to study the notion of symmetry. Wallpaper groups are related to the simpler frieze groups, and to the more complex three-dimensional crystallographic groups. (Full article...)

The Mathematics WikiProject is the center for mathematics-related editing on Wikipedia. Join the discussion on the project's talk page.

In other Wikimedia projects