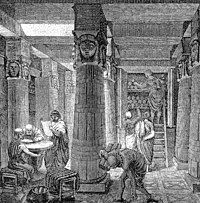 History (from Greek ἱστορία, historia, meaning "inquiry; knowledge acquired by investigation") is the study and the documentation of the past. Events before the invention of writing systems are considered prehistory. "History" is an umbrella term comprising past events as well as the memory, discovery, collection, organization, presentation, and interpretation of these events. Historians seek knowledge of the past using historical sources such as written documents, oral accounts, art and material artifacts, and ecological markers.

History is also an academic discipline which uses narrative to describe, examine, question, and analyze past events, and investigate their patterns of cause and effect. Historians often debate which narrative best explains an event, as well as the significance of different causes and effects. Historians also debate the nature of history as an end in itself, as well as its usefulness to give perspective on the problems of the present.

Stories common to a particular culture, but not supported by external sources (such as the tales surrounding King Arthur), are usually classified as cultural heritage or legends. History differs from myth in that it is supported by evidence. However, ancient cultural influences have helped spawn variant interpretations of the nature of history which have evolved over the centuries and continue to change today. The modern study of history is wide-ranging, and includes the study of specific regions and the study of certain topical or thematic elements of historical investigation. History is often taught as part of primary and secondary education, and the academic study of history is a major discipline in university studies.

Herodotus, a 5th-century BC Greek historian, is often considered the "father of history" in the Western tradition, although he has also been criticized as the "father of lies". Along with his contemporary Thucydides, he helped form the foundations for the modern study of past events and societies. Their works continue to be read today, and the gap between the culture-focused Herodotus and the military-focused Thucydides remains a point of contention or approach in modern historical writing. In East Asia, a state chronicle, the Spring and Autumn Annals, was reputed to date from as early as 722 BC, although only 2nd-century BC texts have survived. (Full article...)

Outline of history · Index
Refresh with new selections below (purge)

Did you know (auto generated)

This is a Featured article, which represents some of the best content on English Wikipedia.

Miniature from the Madrid Skylitzes version of the chronicle of John Skylitzes depicting Thomas, on horseback and dressed as a Byzantine emperor, negotiating with the Arabs. The rebellion of Thomas is one of the most richly illustrated episodes in the chronicle.

An army officer of Slavic origin from the Pontus region (now north-eastern Turkey), Thomas rose to prominence, along with the future emperors Michael II and Leo V the Armenian (r. 813–820), under the protection of general Bardanes Tourkos. After Bardanes' failed rebellion in 803, Thomas fell into obscurity until Leo V's rise to the throne, when Thomas was raised to a senior military command in central Asia Minor. After the murder of Leo and usurpation of the throne by Michael the Amorian, Thomas revolted, claiming the throne for himself. Thomas quickly secured support from most of the themes (provinces) and troops in Asia Minor, defeated Michael's initial counter-attack and concluded an alliance with the Abbasid Caliphate. After winning over the maritime themes and their ships as well, he crossed with his army to Europe and laid siege to Constantinople. The imperial capital withstood Thomas's attacks by land and sea, while Michael II called for help from the Bulgarian ruler khan Omurtag. Omurtag attacked Thomas's army, but although repelled, the Bulgarians inflicted heavy casualties on Thomas's men, who broke and fled when Michael took to the field a few months later. Thomas and his supporters sought refuge in Arcadiopolis, where he was soon blockaded by Michael's troops. In the end, Thomas's supporters surrendered him in exchange for a pardon, and he was executed. (Full article...)
edit

Fortune, which has a great deal of power in other matters but especially in war, can bring about great changes in a situation through very slight forces.

More Did you know...

More did you know facts

Things you can do