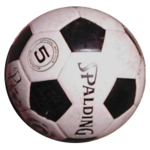 A ball is used in association football
Shortcut

Association football, more commonly known as simply football or soccer, is a team sport played between two teams of 11 players who primarily use their feet to propel the ball around a rectangular field called a pitch. The objective of the game is to score more goals than the opposition by moving the ball beyond the goal line into the opposing side's rectangular framed goal. Traditionally the game has been played over two 45 minute halves, for a total match time of 90 minutes. With an estimated 250 million players active in over 200 countries it is considered the world's most popular sport.

The game of association football is played in accordance with the Laws of the Game, a set of rules that has been in effect since 1863 with the International Football Association Board maintaining them since 1886. The laws stipulate the number of players a team should have, the game length, the size of the field and ball, the type and nature of fouls that referees may penalize, the offside law, and many other laws that define the sport. It is the task of the referee to interpret and enforce the Laws of the Game. The game is played with a football that is 68–70 cm (27–28 in) in circumference. The two teams compete to get the ball into the other team's goal (between the posts and under the bar), thereby scoring a goal. When the ball is in play the players mainly use their feet, but may use any other part of their body to control, strike or pass the ball apart from their hands or arms. Only the goalkeepers may use their hands and arms, and only then within the penalty area. The team that has scored more goals at the end of the game is the winner. Depending on the format of the competition an equal number of goals scored may result in a draw being declared or the game goes into extra time or a penalty shootout.

Internationally, association football is globally governed by FIFA (an abbreviation for Fédération Internationale de Football Association, French for International Federation of Association Football). At a regional level, six continental confederations are responsible for operating competitions between member national associations. The national associations are responsible for managing the game, both professionally and at an amateur level, in their own countries and coordinating competitions in accordance with the Laws of the Game. The most senior and prestigious international competitions are the men's FIFA World Cup and the FIFA Women's World Cup. The men's World Cup is the most-viewed sporting event in the world, surpassing the Olympic Games. Both competitions pit national representative teams against each other in a series of group games, and then a knockout format until two teams remain to compete in the World Cup Final. The men's game sees approximately 190–200 national teams partake in respective qualifying tournaments on a continental confederation level for a place in the main tournament. The main tournament is held every four years and involves 32 national teams spanning over four weeks.. The first competition was the 1930 FIFA World Cup in Uruguay. (Full article...)

1930 World Cup poster
The 1930 FIFA World Cup was the first football World Cup tournament ever staged. It was played in Uruguay from July 13 to July 30. FIFA chose Uruguay as hosts at the Barcelona conference on May 18, 1929, as the country would be celebrating the centenary of its independence and the Uruguay national football team had successfully retained their football title at the 1928 Summer Olympics.

Thirteen teams participated; nine from the Americas and four from Europe. Few European teams chose to participate due to the duration and cost of travel. The first two World Cup matches took place simultaneously, and were won by France and the USA, who beat Mexico 4-1 and Belgium 3-0, respectively. The first goal in World Cup history was scored by Lucien Laurent of France. In the final, hosts and pre-tournament favourites Uruguay defeated Argentina 4-2 in front of a crowd of 93,000 people, and became the first nation to win a World Cup. (Full article...)

Thierry Henry
Thierry Henry (born 17 August 1977), is a French football player who plays in the position of striker and is renowned for his pace and goal scoring record.

Henry was spotted by AS Monaco in 1990 and signed to a youth contract instantly, making his professional début in 1994. Good form led to an international call-up for France in 1998, after which he signed for the Italian defending champions Juventus. He had a disappointing season playing on the wing, before joining Arsenal for £10.5 million in 1999.

Despite initially struggling in the Premiership, under long-time mentor and coach Arsène Wenger he emerged as Arsenal's top goal-scorer for almost every season he played. Henry won two league titles and three FA Cups with The Gunners, was twice nominated for the FIFA World Player of the Year and became Arsenal's all-time leading scorer with 226 goals in all competitions. In June 2007, after eight years with Arsenal, he transferred to FC Barcelona for a fee of £16.1 million.

Henry has also had success with the French national squad, having been part of the squad that won both the 1998 FIFA World Cup and Euro 2000. In October 2007, he surpassed Michel Platini's record becoming the country's top goal-scorer of all time. (Full article...)

Football Australia oversees the men's, women's, youth, Paralympic, beach and futsal national teams in Australia, the national coaching programs and the state governing bodies for the sport. It sanctions professional, semi-professional and amateur soccer in Australia. Football Australia made the decision to leave the Oceania Football Confederation (OFC), for which it was a founding member, and become a member of the Asian Football Confederation (AFC) on 1 January 2006 and ASEAN Football Federation (AFF) on 27 August 2013. (Full article...) 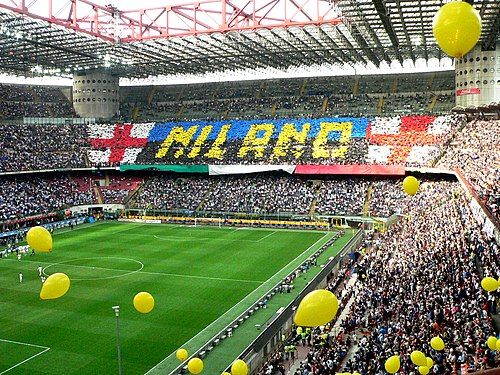 San Siro
Credit: Flickr user luiginter
A group of supporters (Ultras) of Italian team Inter Milan create a display in the San Siro. The ground, which they share with rivals A.C. Milan, has the largest capacity in Italian football after its 1989 renovation in preparation for Italia '90.
edit

The following are images from various association football-related articles on Wikipedia.

The 2014 FIFA World Cup (Brazilian Portuguese: Copa do Mundo FIFA de 2014) was the 20th FIFA World Cup, the quadrennial world championship for men's national football teams organised by FIFA. It took place in Brazil from 12 June to 13 July 2014, after the country was awarded the hosting rights in 2007. It was the second time that Brazil staged the competition, the first being in 1950, and the fifth time that it was held in South America. Fans and pundits alike consider this edition of the World Cup to be one of the greatest ever held.

31 national teams advanced through qualification competitions to join the host nation in the final tournament (with Bosnia and Herzegovina as the only debutant). A total of 64 matches were played in 12 venues located in as many host cities across Brazil. For the first time at a World Cup finals, match officials used goal-line technology, as well as vanishing spray for free kicks. FIFA Fan Fests in each host city gathered a total of 5 million people, and the country received 1 million visitors from 202 countries. Every World Cup-winning team since the first tournament in 1930 – Argentina, Brazil, England, France, Germany, Italy, Spain and Uruguay – qualified for this tournament. Spain, the title holders, were eliminated at the group stage, along with England and Italy. Uruguay were eliminated in the round of 16, and France exited in the quarter-finals. Host nation Brazil, who had won the 2013 FIFA Confederations Cup, lost to Germany 7–1 in the semi-finals and eventually finished in fourth place. (Full article...)
edit

More Did you know facts
edit