Piumhi (Portuguese pronunciation: [pjũˈi]) is a Brazilian municipality located in the west of the state of Minas Gerais. Its population as of 2020 was 34,918 people living in a total area of 902 km².[1] The city belongs to the meso-region of Oeste de Minas and Alto Paranaíba and to the micro-region of Piumhi. It became a municipality in 1868.[2] 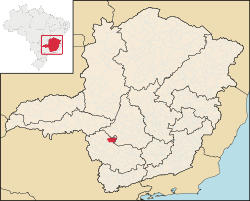 The origin of the word "pium-i" is indigenous and it means either "river of many fish" or "water of many flies".[3]

The city center of Piumhi is located at an elevation of 922 meters, just off state highway MG-050. Neighboring municipalities are: Bambuí (N), Doresópolis (NE), São Roque de Minas (S and SE), and Sacramento (W).[4] The great reservoir of Furnas lies a short distance to the south and the National Park of Serra da Canastra, with the source of the São Francisco River, lies 50 km to the west.

Piumhi is connected to Passos, in the southwest, and Formiga, in the east, by state highway MG-050. The nearest railroad station is in Formiga. The distance to Belo Horizonte is 264 km.

In the health sector there were 13 public health clinics (2005) and 1 hospital with 118 beds. Patients with more serious health conditions are transported to Araxá or to Uberaba, which are connected by good roads. Educational needs of 6,500 students were met by 14 primary schools, 5 middle schools, and 12 pre-primary schools.[2]