At the end of each FIFA World Cup final tournament, several awards are presented to the players and teams which have distinguished themselves in various aspects of the game.

There are currently five post-tournament awards, and one given during the tournament:[1]

From 2010 onwards, all Dream Teams or statistical teams are unofficial, as reported by FIFA itself.

The Golden Ball award is presented to the best player at each FIFA World Cup finals, with a shortlist drawn up by the FIFA technical committee and the winner voted for by representatives of the media. Those who finish as runners-up in the vote receive the Silver Ball and Bronze Ball awards as the second and third most outstanding players in the tournament respectively. The current award was introduced in the 1982 FIFA World Cup, sponsored by Adidas and France Football.[3]

In July 1978, a panel of 23 international experts which consisted of critics, coaches, and former players each chose the five best players of the 1978 tournament.[5] Mario Kempes got the most votes as a result of the counting. FIFA website and RSSSF also mentioned Kempes as a Golden Ball winner.[6][7][8] The FIFA website and RSSSF only mention Dirceu as the Bronze Ball winner, even though Dirceu and Hans Krankl had the same amount of top five finishes.

On August 2nd 1950 the German newspaper Kicker (then Sport-Magazin) published an article, written by Dr. Friedebert Becker, in which Dr. Becker chose in his opinion the best players of the tournament.[35]

France Football, the sponsor of Golden Ball and Ballon d'Or, selected the best player of the 1966 FIFA World Cup at that time with L'Équipe, and Bobby Charlton became the winner.[36] The FIFA website also seems to agree on Bobby Charlton winning the Golden Ball[25] and Eusébio winning the Bronze Ball.[33]

In 1998 the Argentinian newspaper Clarín provided a brief description of each star player dating back to 1930. Some are controversial decisions as is the case with retrospective awards.[37] The 1998 winner was awarded after the tournament ended.

If there is more than one player with the same number of goals, since 1994 the tie-breaker goes to the player with fewer goals scored from penalties, then next tie breaker goes to the person with more assists - with the FIFA Technical Study Group deciding whether an assist is to be counted as such.[40][41] If there is still more than one player, the tie-breaker since 2006 goes to the player who has played the least amount of time, which translates to a higher goal average.[42]

The Golden Glove Award is awarded to the best goalkeeper of the tournament. The award was introduced with the name Lev Yashin Award in 1994, in honor of the late Soviet goalkeeper.[4] It was rechristened Golden Glove in 2010. The FIFA Technical Study Group recognises the top goalkeeper of the tournament based on the player's performance throughout the final competition. Although goalkeepers have this specific award for their position, they are still eligible for the Golden Ball as well, as when Oliver Kahn was awarded in 2002. In the event of a tie, the Golden Glove Award goes to the goalkeeper who progressed furthest in the competition. The next tiebreakers are saves made, then minutes played.

The Best Young Player award was awarded for the first time at the 2006 World Cup in Germany and given to Germany's Lukas Podolski.[68] The award is given to the best player in the tournament who is at most 21 years old. For the 2018 World Cup, this meant that the player had to have been born on or after 1 January 1997. The election took place on FIFA's official World Cup website with the help of The FIFA Technical Study Group.[69]

FIFA organised a survey on the Internet for users to choose the "best young player" of the World Cup, between 1958 and 2002, named the best young player of each tournament.[70] With 61% of the overall vote, the winner was Pelé, who finished ahead of the Peruvian Teófilo Cubillas, the best young player at Mexico 1970, and England's Michael Owen, who reached similar heights at France 98.[71]

The FIFA Fair Play Trophy is given to the team with the best record of fair play during the World Cup final tournament since 1970. Only teams that qualified for the second round are considered. The winners of this award earn the FIFA Fair Play Trophy, a diploma, a fair play medal for each player and official, and $50,000 worth of football equipment to be used for youth development.[76]

The appearance of the award was originally a certificate. From 1982 to 1990, it had been a golden trophy based on Sport Billy, a football-playing cartoon character from 1982 who became an icon for FIFA Fair play.[77][78] Ever since 1994, it is simply a trophy with an elegant footballer figure.[79] Peru was the first nation to win the award after receiving no yellow or red cards in the 1970 FIFA World Cup held in Mexico.[80] 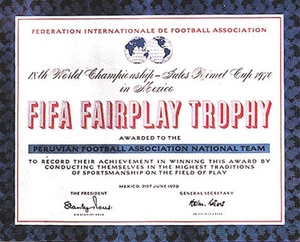 Peru's FIFA Fair Play trophy award. Peru won the award after receiving no yellow or red cards in the tournament.

The Man of the Match award picks the outstanding player in every game of the tournament since 2002. While the inaugural two editions were chosen by the technical group,[81][82] the Man of the Match is since 2010 picked by an online poll on FIFA's website.[83][84]

The FIFA Award for the Most Entertaining Team is a subjectively awarded prize for the team that had done the most to entertain the public with a positive approach to the game, organised through public participation in a poll[4] starting in 1994.[38]

The All-Star Team is a team of the best performers at the respective World Cup finals. Since 1994, FIFA decided to add official best squads, chosen by its technical group under the brand name MasterCard All-Star Team.[87] For 1998, 2002 and 2006, substitute and reserve members were also nominated for full squads.

FIFA published the first All-Star Team in 1938, but it never made All-Star Team again until 1990 due to ensuing complaints.[60] In January 1959, the host of 1958 tournament Swedish Federation published an All-Star Team based on 720 answers out of 1,200 experts.[61][91] In 1990 there was an All-Star Team announced in combination with the Golden Ball ceremony. It was chosen by the same journalists who chose the best player, but this team is still considered unofficial.[92][93]

After FIFA changed its sponsor from MasterCard to Visa in 2007,[94] it published Team of the Tournament based on statistical data of other sponsors, which evaluates players' performances. FIFA explained these are not official.[95]

Since 2010, the fans' Dream Team has been voted by online poll of FIFA website, but FIFA explained this is also not official team.[95]

Since the beginning many newspapers gave players points to players based on their performances at the World Cup. Some are based in statistics, but some were just rankings given by experts.[101] Castrol Football has given retrospective rankings to players until 1966 with their expert panel consisting of people such as Cristiano Ronaldo, Arsène Wenger, Marcel Desailly, Cafu, Alan Shearer, Emilio Butragueño, Ronald Koeman, Pierluigi Collina, Ottmar Hitzfeld, Gary Bailey, Peter Stöger, Mohamed Al-Deayea and Stanislav Levý.[102]