The Cruyff turn (also spelled Cruijff turn in the Netherlands) is an evasive dribbling move used in football, and named after Dutch player Johan Cruyff.[2] 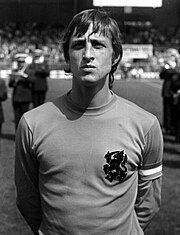 Johan Cruyff and his only World Cup tournament (1974) 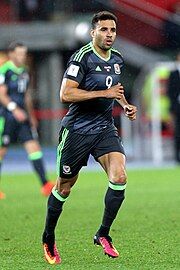 In the 24th minute of the game against Sweden in the group stage of the 1974 World Cup, while Cruyff had control of the ball in an attacking position but was facing his own goal and being guarded tightly by Swedish defender Jan Olsson, Cruyff feigned a pass before dragging the ball behind his standing leg, turning 180 degrees, and accelerating away.[3] With its simplicity, effectiveness and unpredictability, the Cruyff turn remains one of the most commonly recognized dribbling moves in modern football.[4][5][1][6]

The turn however was first done by Adrian Alston (Australia) against East Germany in the same world cup. Cruyff saw this move and copied it.