Conté (French pronunciation: ​[kɔ̃te]), also known as Conté sticks or Conté crayons, are a drawing medium composed of compressed powdered graphite or charcoal mixed with a clay base, square in cross-section. They were invented in 1795 by Nicolas-Jacques Conté, who created the combination of clay and graphite in response to the shortage of graphite caused by the Napoleonic Wars (when the British naval blockade of France prevented import). Conté crayons had the advantage of being cost-effective to produce, and easy to manufacture in controlled grades of hardness. 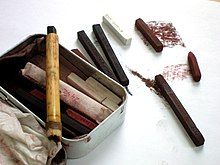 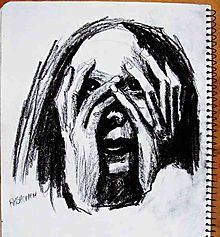 Conté crayons are most commonly found in black, white, and sanguine tones, as well as bistre, shades of grey, and other colors.

Colors sets are especially useful for field studies and color studies. Some artists create entire paintings with them, using them more like pastels than like a drawing medium. They are also used often to sketch under pastel paintings or lay down initial layers before using dry pastels. Colors can be layered to produce different hues or values. Color Conté mixes better on paper than many hard pastel products.

They are frequently used on rough paper that holds pigment grains well. They can also be used on prepared primed canvases for underdrawing for a painting. Conté crayons are hard and have square edges, making them more suitable for detailed hatched work as opposed to the bolder painterly drawing style demanded by soft pastels.

In the 1880s, Georges Seurat used Conté crayons to produce many of his studies.