The Black Brant is a family of Canadian-designed sounding rockets originally built by Bristol Aerospace, since absorbed by Magellan Aerospace in Winnipeg, Manitoba. Over 800 Black Brants of various versions have been launched since they were first produced in 1961, and the type remains one of the most popular sounding rockets.[1] They have been repeatedly used by the Canadian Space Agency and NASA. 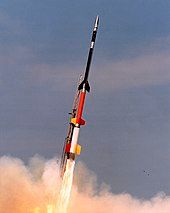 Black Brant was the result of research at Canadian Armament Research and Development Establishment (CARDE) during the 1950s into the nature of the upper part of the atmosphere as part of ongoing research into anti-ballistic missile systems and very-long-range communication. In 1957 CARDE contracted Bristol to produce a simple rocket fuselage, called the Propulsion Test Vehicle, for studies into high-power solid fuels. The resulting design, by Albert Fia, was quite heavy, as it was designed to be able to accommodate a wide variety of engine burning times, propellant loadings and launch angles in keeping with its role as a test vehicle for ABM systems development. The first test flight took place only two years later from the Churchill Rocket Research Range in September 1959.[2]

CARDE's attention later turned to long-distance communications and they found the Propulsion Test Vehicle system useful as a sounding rocket. To better suit this role, Bristol modified the design to be lighter and more tailored to the sounding rocket role. This became the Black Brant. CARDE launched a number of Black Brant rockets over the next few years, both the original Black Brant I design which could place a 68 kg (150 lb) payload to 150 km (93 mi) altitude, as well as the larger Black Brant II which first flew in October 1960, and the smaller but higher-altitude Black Brant III.

The rocket's design emphasized reliability over payload and range.[3] In July 1963 the much larger Black Brant V first flew, which was also used as a booster stage for the Black Brant III to make the Black Brant IV. The IV first flew in 1964, but failed, as did the next test launch. Aside from these two launches, which were corrected for, the Black Brant has never had another failure, making it one of the most reliable rockets in history. Since then it has undergone continual evolution, and the current versions are the XI and XII, consisting of Black Brant V used as an upper stage, with Talos and Terrier boosters as lower stages. They have reached altitudes of more than 1,500 km (930 mi), which is above the ionosphere and well above the orbits of the Space Shuttle and the International Space Station.

The propellant designs developed by CARDE in the Black Brant program were the highest performing solid fuels of their day. Bristol then placed this propellant in a new 70 mm (2.8 in) rocket to form the CRV7, the first rocket capable of penetrating standard Warsaw Pact aircraft hangars. The CRV7 has since gone on to become the de facto standard rocket for most Western-aligned militaries.

In 1976, Australia and Canada through the National Research Council Canada (NRCC) agreed[4] to launch a rocket from Woomera Test Range. The Black Brant VB rocket was launched there on 9 November for experiments in the ionosphere.[5] Later NASA would launch a number of Black Brant IX.

At present, due to its 98% success rate, it remains one of the most popular sounding rockets ever built. The rockets have been used repeatedly by the Canadian Space Agency and NASA. There is a 1:1 scale model of the Black Brant IX rocket in front of the head office of the Canadian Space Agency in Saint-Hubert, east of Montréal. A full-scale Black Brant VC is on display in the Science Gallery of The Manitoba Museum in Winnipeg, Manitoba, Canada.

In 1995, a Black Brant XII four-stage sounding rocket from the Andøya Rocket Range off the northwestern coast of Norway caused the Norwegian rocket incident, also known as the Black Brant scare. The trajectory resembled that of a U.S. Navy submarine-launched Trident missile. Russian nuclear forces were put on high alert as a result, fearing a high-altitude nuclear attack that could blind Russian radar, and Russia's "nuclear briefcase", the Cheget, was brought to Russian President Boris Yeltsin, who then had to decide whether to launch a retaliatory nuclear strike against the United States. It is the first and thus far only known incident where any nuclear-weapons state had its nuclear briefcase activated and prepared for launching an attack.

On September 19, 2009, a Black Brant XII that was launched to study clouds caused numerous calls from the northeastern U.S. reporting "strange lights in the sky". NASA reported that the light came from an artificial noctilucent cloud formed by the exhaust particles of the rocket's fourth stage at an altitude of about 278 km (173 mi).

the following is enumerated by roman numerals

Size comparison of various sounding rockets, including several versions of the Black Brant

The II was the first rocket for scientific use and was ready in 1960.[9]